To be honest, we don’t know much about Bonis Mundi. CIA’s intels were pretty light, but the most important thing to know is that it’s probably a threat to the US !

CIA told us they were creating a weapon that could be hugely powerful but we don’t know what kind of weapon it is. And for this kind of mission, only us, the ASA can do clean INTEL-RECO operation.

The intelligence also told us the meaning of “Bonis Mundi”. Apparently it’s Latin and it means “The good of the world”. Yeah, of course bad guys always think they are good in a way.

It will be all for now, but if the CIA comes back to me, I’ll be happy to share !

Be always ready to fight, even if it’s seems calm.

Deep inside Time Squared’s City 67, 3 soldiers are looking for you 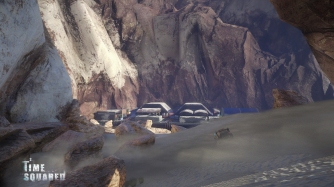 A bit lost in Time Squared’s desert ? The sand storm won’t help you 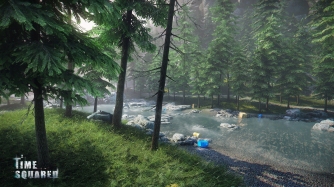 Some places are pretty peaceful in Time Squared. Like this river flowing slowly

The best car ever, the FENEC-081 is able to drive on all terrains and will bring you everywhere you need

Picture of one of the building of the CUBE facility